While driving over rough or bumpy roads, some vehicles may exhibit a rattle / pop noise from the instrument panel and/or a creak noise from the A-pillar.

The rattle / pop noise may be caused by low cowl panel (A) mounting bolt (B) torque.

This noise may be caused by two joined panels (A) scraping together at the A-pillar. The panel weld areas have been improved during the mass-production of vehicles with VINs JM3KE******128359 (produced June 1, 2012) or higher.

While verifying the customer concern, it may be difficult to distinguish the rattle / pop noise from the creak noise. Use the table below to determine the appropriate repair.

CAUTION: To avoid damaging the windshield, be sure to apply adequate protection along the bottom edge of the glass (i.e. tape or a sliced rubber hose) before retightening the cowl panel bolts. 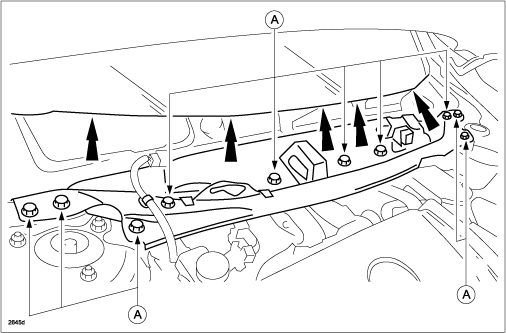 NOTE: Passenger Side Only: When reinstalling the cowl side seal plate, make sure to install the rear window washer hose (B) in the opening (A) to avoid hose damage.